Europa Uomo proudly announces the launch of its second quality of life survey, designed to find out more about how prostate cancer and its treatments affect men weeks, months and years after diagnosis. It is urging all men who have experience of prostate cancer to take part.

The study, named EUPROMS 2.0, is based on an online survey which takes only 25 minutes to complete. Data from the survey, which is anonymous, will be used to help others diagnosed with prostate cancer to make treatment decisions, and will help patient organisations push for improvements for men with prostate cancer and their families.

Europa Uomo’s first EUPROMS survey, launched in 2019 and described as “probably the most important initiative ever launched by the organisation”, had an enormous impact.  It drew on nearly 3,000 survey responses to provide important findings about life after prostate cancer treatment, including the fact that half of men say that sexual functioning has been a significant problem for them and that 42% of men are left anxious or depressed.

EUPROMS was reported in many scientific journals and conferences, and has played a key role in lobbying European politicians for better early detection – which the study clearly found had an impact on quality of life as well as length of life.

Now its influence could grow, as the EUPROMS 2.0 study aims to provide another layer of information including, for example, detail about how long after treatment men feel its effects, and whether the quality of life of men with prostate cancer is better if early detection programmes are in use.

“When we started EUPROMS over two years ago, I would not have imagined what an impact it would have had and is still having,” says Europa Uomo Chairman André Deschamps. “By participating in the follow-up EUPROMS 2.0 survey, men with prostate cancer can build on that, and have a major influence on the way that diagnosis, services and support are delivered in the future.”

A range of materials in different languages are now available to help publicise the survey to men with prostate cancer, including a downloadable flyer to distribute online or to print and hand out, and social media tiles for Twitter and Facebook. We are asking groups and individuals to do all they can to publicise the survey. 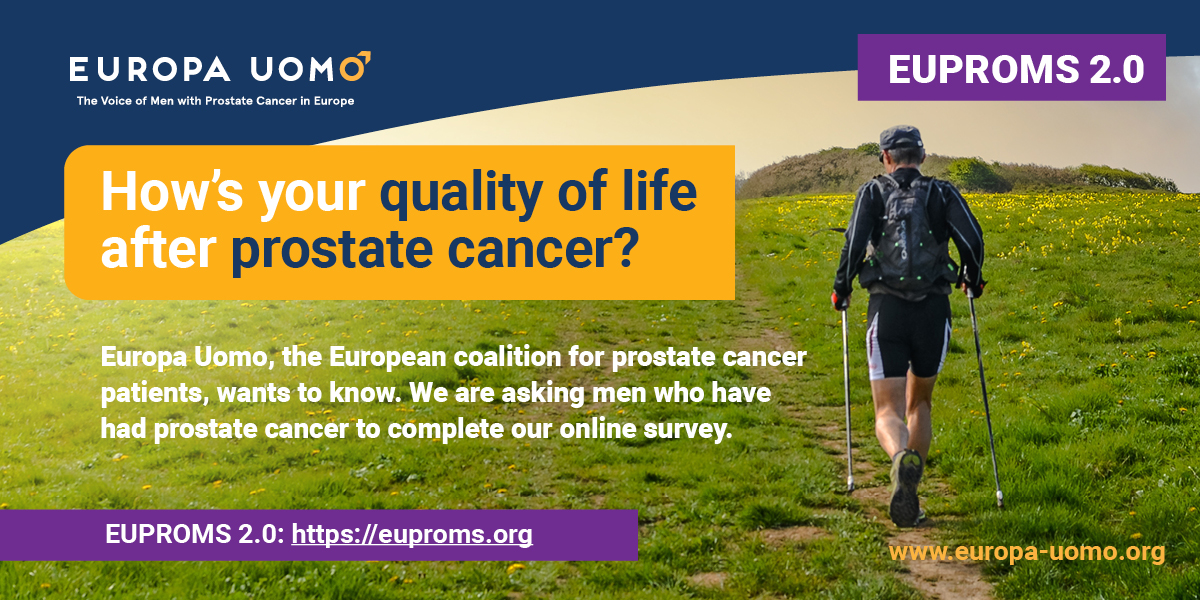 EU's Cancer Plan 'at risk' if funding issue not resolved

Time for politicians to act on prostate cancer