Based on nearly 3,000 responses to an online questionnaire by men with prostate cancer across Europe, it provides a new perspective. Most other quality of life studies are conducted by and with doctors in a clinical environment, when patients are visiting for treatment or check-ups. The EUPROMS questionnaire was completed by men in their own time, in the comfort of their homes, meaning they had more time to consider their answers and might have felt more at ease to say how they really feel.

The survey findings here present an overview of what EUPROMS discovered, and are designed for a general, rather than a scientific, audience. They are a “snapshot” picture of what quality of life issues are being experienced by men with prostate cancer at a particular point of time.

The findings provide information that may:

You are welcome to publicise the results or charts without permission, but they must always be credited to Europa Uomo’s EUPROMS study. 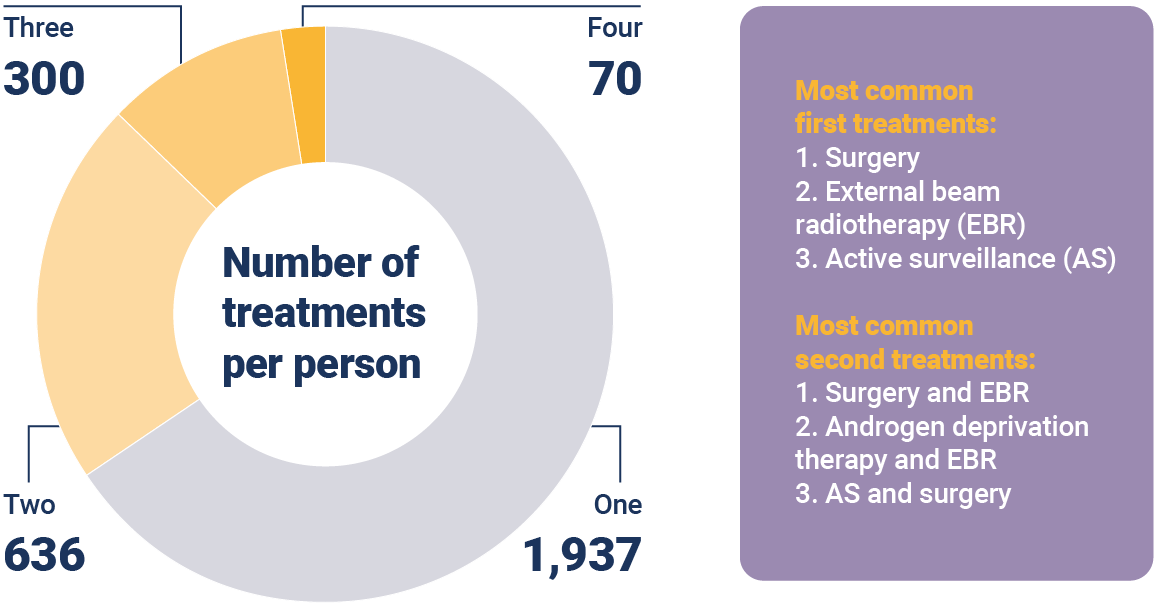 General findings about quality of life

Taken overall, respondents’ quality of life is comparable to the general population. But some aspects of life are much better than others. 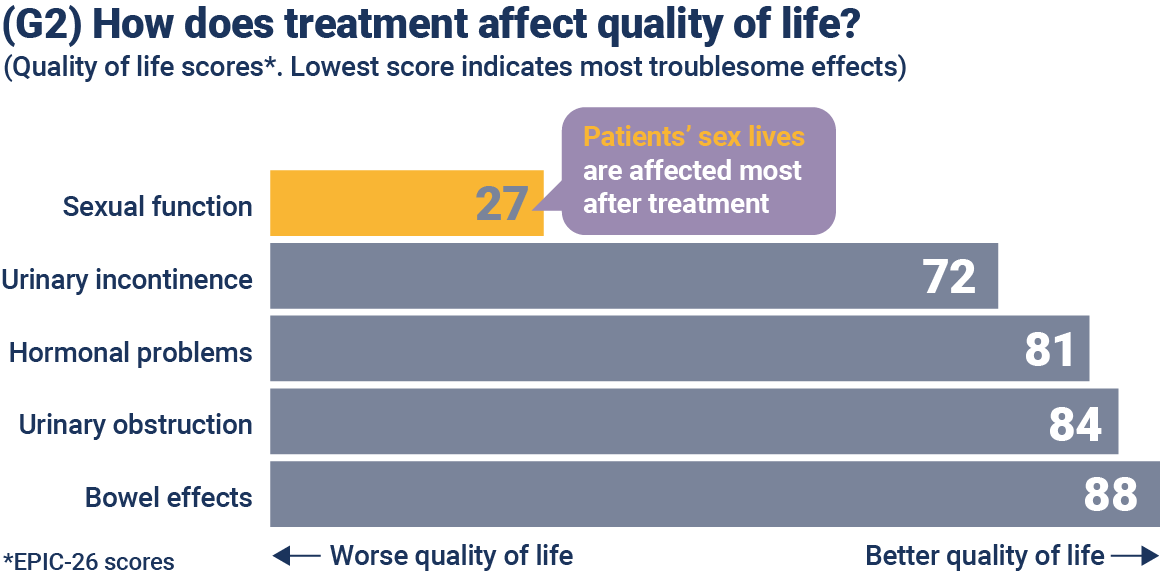 Findings about discomfort, tiredness and insomnia

Looking at specific aspects of quality of life after prostate cancer treatment, when it comes to pain and discomfort, this increases as men move through the treatment stages. More than three times the pain and discomfort are reported after chemotherapy compared with early stage treatments (D1).

For tiredness, more than one third of men who had received chemotherapy said they had felt tired in the past week – twice the number of other treatment groups. And with insomnia, the study found men were affected more after radiotherapy with ADT and also after chemotherapy. The effects nearly double as treatment progresses.

In mental health, the study found that 42% of men who have been treated for prostate cancer say they are anxious or depressed to some extent. Which treatments are most linked with mental health problems? Chart M4 shows that the problems seem to get worse the more advanced the cancer, when men are more likely to be receiving ADT and chemotherapy. 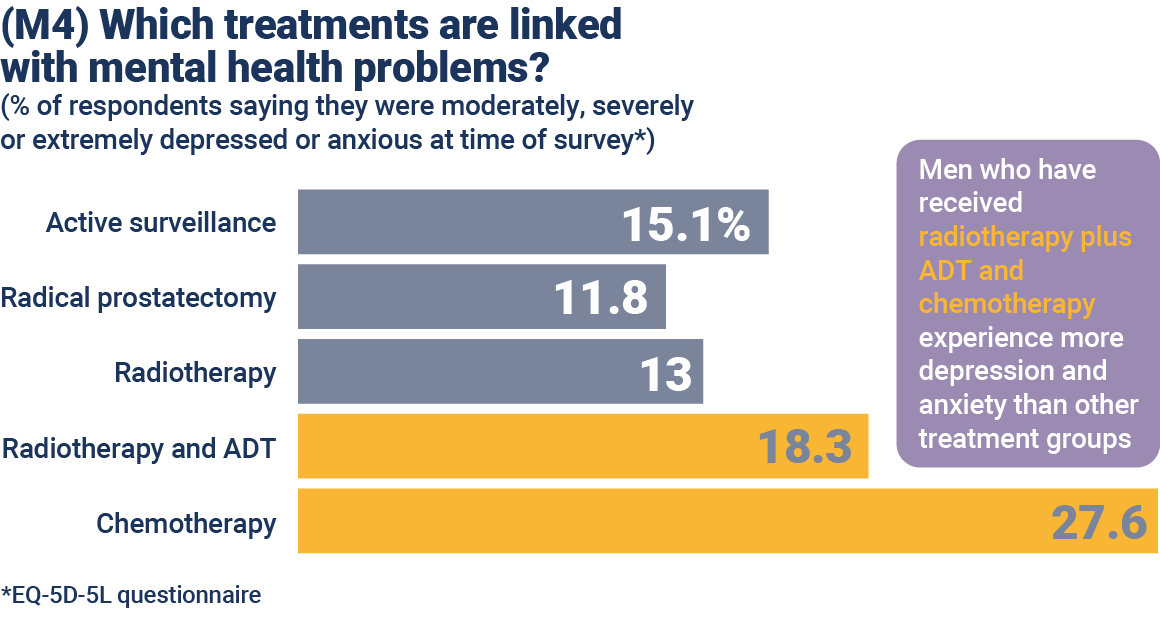 Active surveillance seems to be associated with higher levels of depression or anxiety than treatments such as radical prostatectomy and radiotherapy. This may be related to the long-term worry that can be brought by regular testing, and the fact that treatment decisions may still have to be made.

The study found that men experience roughly equal levels of anxiety in the first and second line of treatment, and anxiety and depression tend to diminish after treatment ends. But a recurrence can affect mental health a great deal. More than half of the respondents who had a recurrence rate the effect on their mental health as six or more on a scale of one to ten – in other words, it had a significant effect.

How big a problem is sexual functioning after treatment? Chart S2 shows it is a big or moderate problem in around half of men. When asked how they rated their ability to function sexually, around three quarters of men with prostate cancer rated it as poor or very poor. For comparison, another study of men of the same age group without prostate cancer found that half rated their sexual function as poor or very poor. 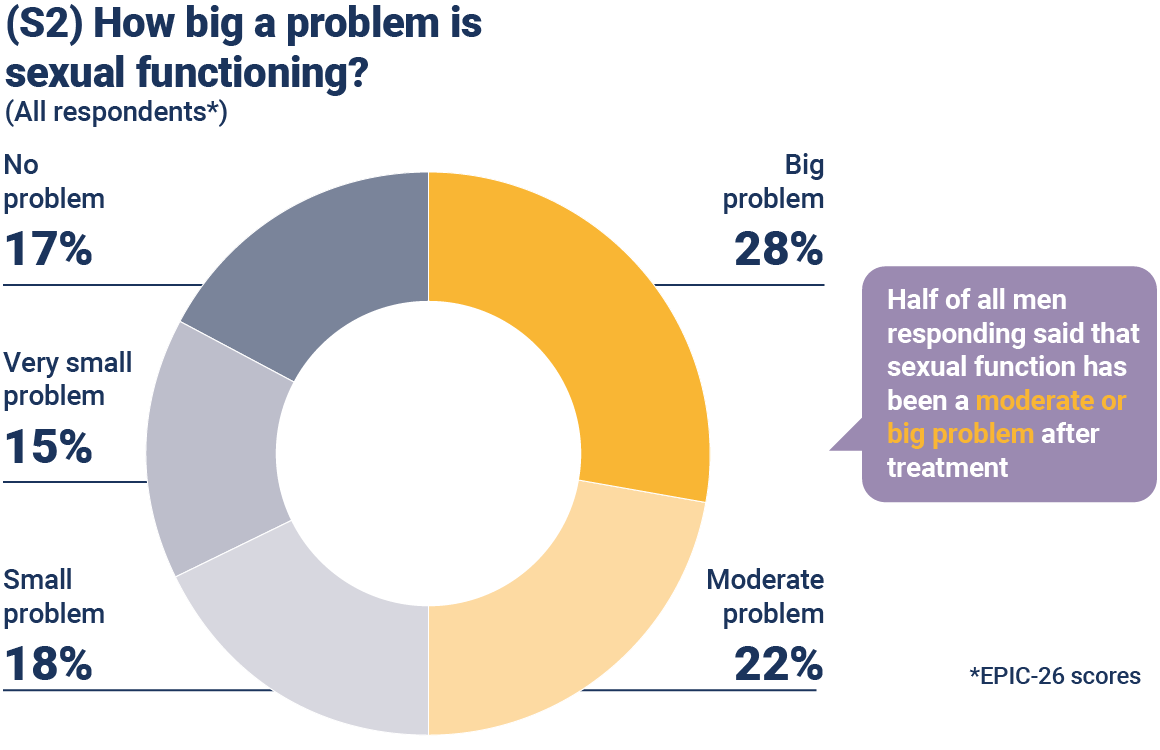 Chart S4 shows that more prostatectomy patients than radiotherapy patients see lack of sexual functioning as a big problem. However, generally the survey suggests that radiotherapy also has a big impact. 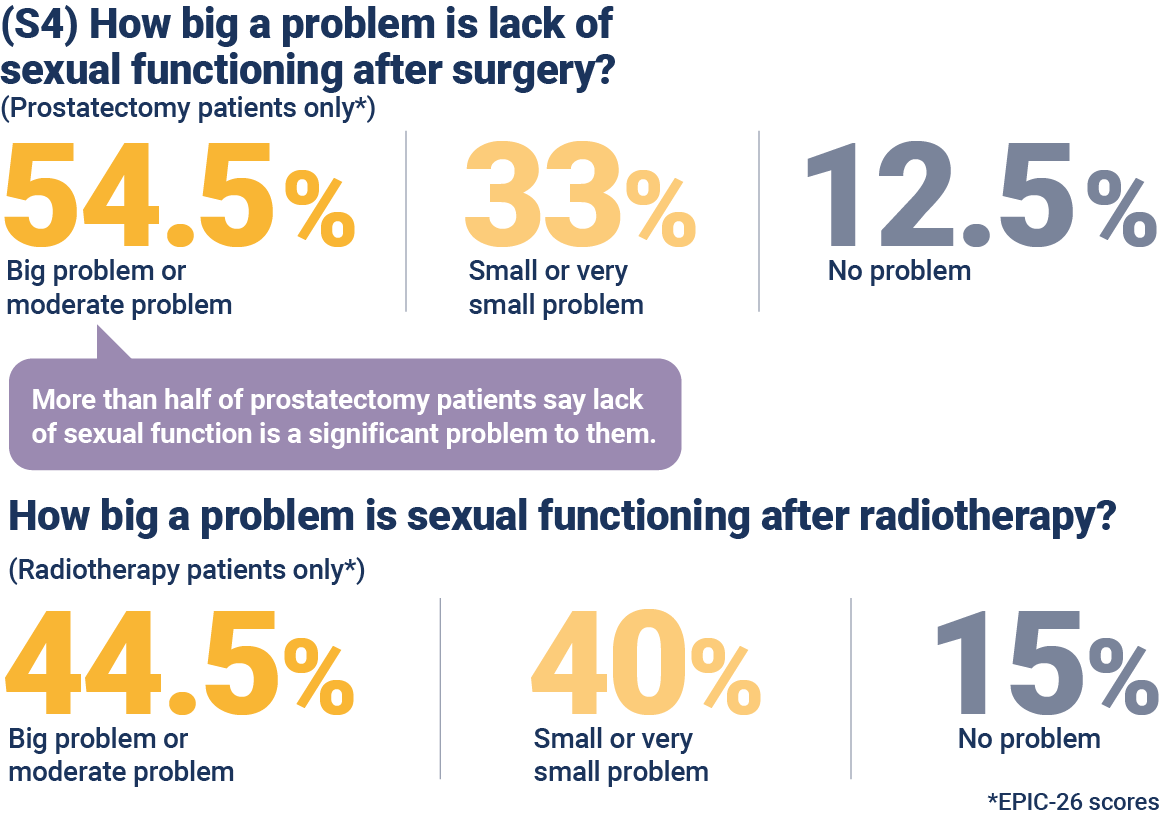 Looking at incontinence, overall, 61% of the men surveyed said they lacked some urinary control (frequent dripping or no control) and 17% judged it to be a big or moderate problem. Those who have had a prostatectomy report less urinary control than those who have had radiotherapy or other treatments, and this results in a lower quality of life related to urinary symptoms. Comparing the surgery figure with active surveillance suggests that surgery doubles the rate of incontinence (see U2). 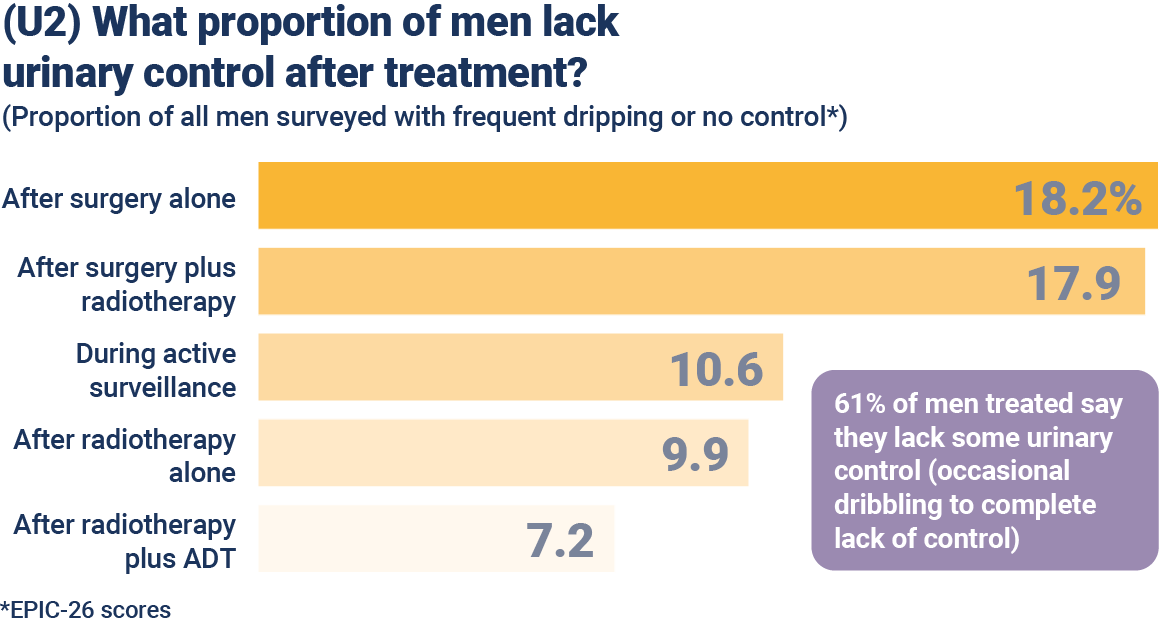 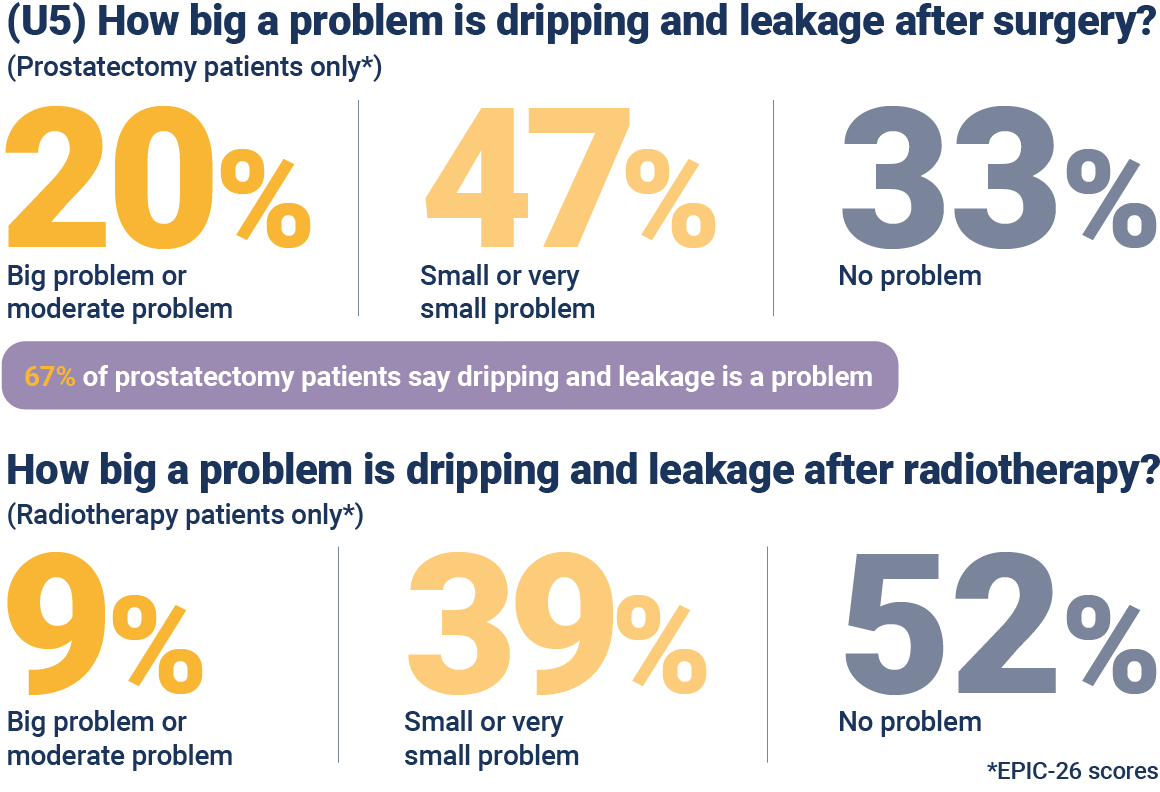 What does this mean for patients in practical terms? The survey asked men how many incontinence pads they use each day, and across all the survey respondents over a third use one or more pads a day. Of respondents who had had a prostatectomy, half were using pads. To put this into context, a 2017 study of men with roughly the same age profile who had NOT been treated for prostate cancer found that around 5% wear pads (PMID: 28168601). So there is clearly a significant effect here. 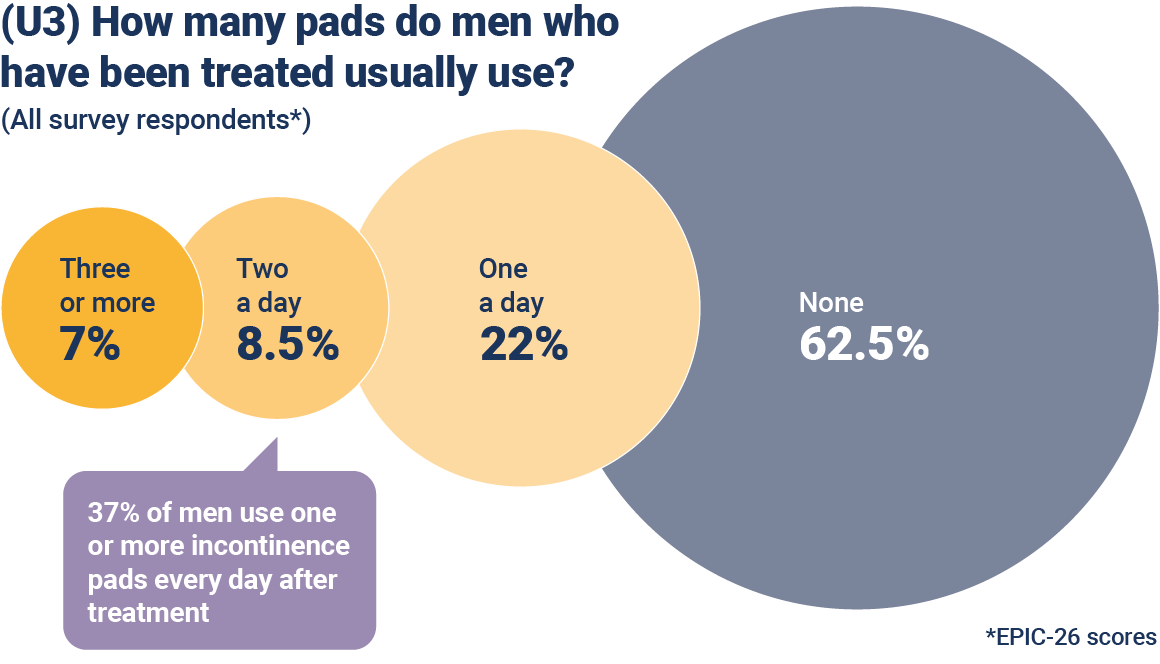 There are three main take-home messages from the EUPROMS findings.

Download a Powerpoint presentation of the results with commentary

Summary of findings in 17 languages